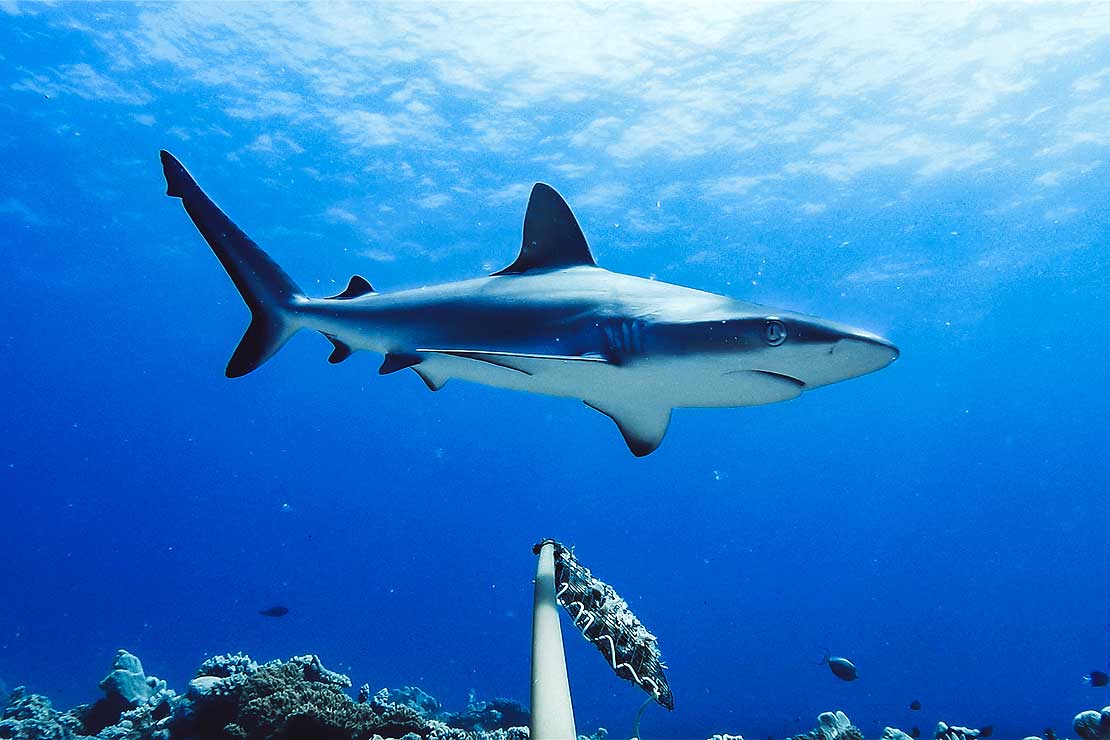 Reef sharks were not observed on nearly 20 per cent of the reefs in 58 countries. Image credit: Global FinPrint. Massey University researchers have played a crucial role in the first global assessment of sharks on coral reefs, by providing project data from the Kermadec Islands, New Caledonia, Fiji and Tonga.

The study, published in Nature today by a team of scientists under the Global FinPrint project, reveals that, in many parts of the world, sharks are virtually absent and functionally extinct as a result of overfishing. This means they are too rare to fulfil their normal roles in the ecosystem.

Of the 371 reefs surveyed in 58 countries, sharks were not observed on nearly 20 per cent, which researchers say indicates a widespread decline that has gone undocumented on this scale until now. The study is being dubbed the first-ever benchmark for the status of reef sharks and was funded by the Paul G. Allen Family Foundation.

Over four years, hundreds of scientists, researchers and conservationists around the world captured and analysed more than 15,000 hours of video, which was captured by Baited Remote Underwater Video. The study was led by a network of collaborators from Florida International University, the Australian Institute of Marine Science, Curtin University, Dalhousie University, and James Cook University.

Researchers say these sharks are an iconic species that are important food resources, tourism attractions, and top predators on coral reefs. They are attributing the decline to the overfishing of sharks and their prey through destructive fishing practices, such as the use of longlines and gillnets. Illegal fishing of sharks for their fins is also causing catastrophic declines of shark populations worldwide.

Massey University School of Natural and Computational Sciences senior lecturer Dr Adam Smith, who has dedicated much of his career to researching sharks, first heard about the project in 2017 and was impressed by the sheer scale of what it was aiming to achieve. The University had just purchased some bait cameras for a separate project, so he reached out to see if Global FinPrint were interested in collaborating and accessing their findings.

“I was intrigued and wanted to become involved because sharks are rare and very hard to study. Contrary to popular belief, they are usually very shy, so sometimes we see lots of sharks on the videos but when we go scuba diving in the same places, we don’t see any.

He says coral reefs are found in some of the remotest places in the world and most of them are very hard to get to.

“It was such a privilege for me and my colleagues and students to see first-hand some of the most remote and pristine coral reefs in the world. It was a rare glimpse of what marine ecosystems would have been like before humans began to exploit them.”

The study revealed several countries where shark conservation is working and the specific actions that can work. The best performing nations compared to the average of their region included Australia, the Bahamas, the Federated States of Micronesia, French Polynesia, the Maldives, and the United States. The study shows these nations reflect key attributes that were found to be associated with higher populations of sharks: being generally well-governed, and either banning all shark fishing or having strong, science-based management limiting how many sharks can be caught.

Dr Smith says sharks are more vulnerable to overfishing than most other fishes because they reproduce slowly.

“Some fish can release millions of eggs in a single day, but sharks give birth to litters of only a few young. In some species, females only reproduce every second or third year. This means they can’t sustain as much fishing pressure, their populations are slower to recover, and they’re more vulnerable to extinction.

“This is the same reason that whales proved so vulnerable to exploitation. Humans stopped widespread whaling because their populations couldn’t take it, but we’re still exploiting sharks. Globally, we catch up to 100 million sharks per year.”

The report highlights what and where protection measures are likely to be most successful.

“We found that robust shark populations can exist alongside people when those people have the will, the means, and a plan to take conservation action,” Dr Chapman says.

Dr Smith says any research into shark populations is a big step forward for the species.

“There is very little research on sharks in New Zealand – you’d be surprised at how easy it is to get to the limit of our knowledge. You start asking questions about our sharks, and you’ll very quickly get to the answer ‘we simply don’t know’”.