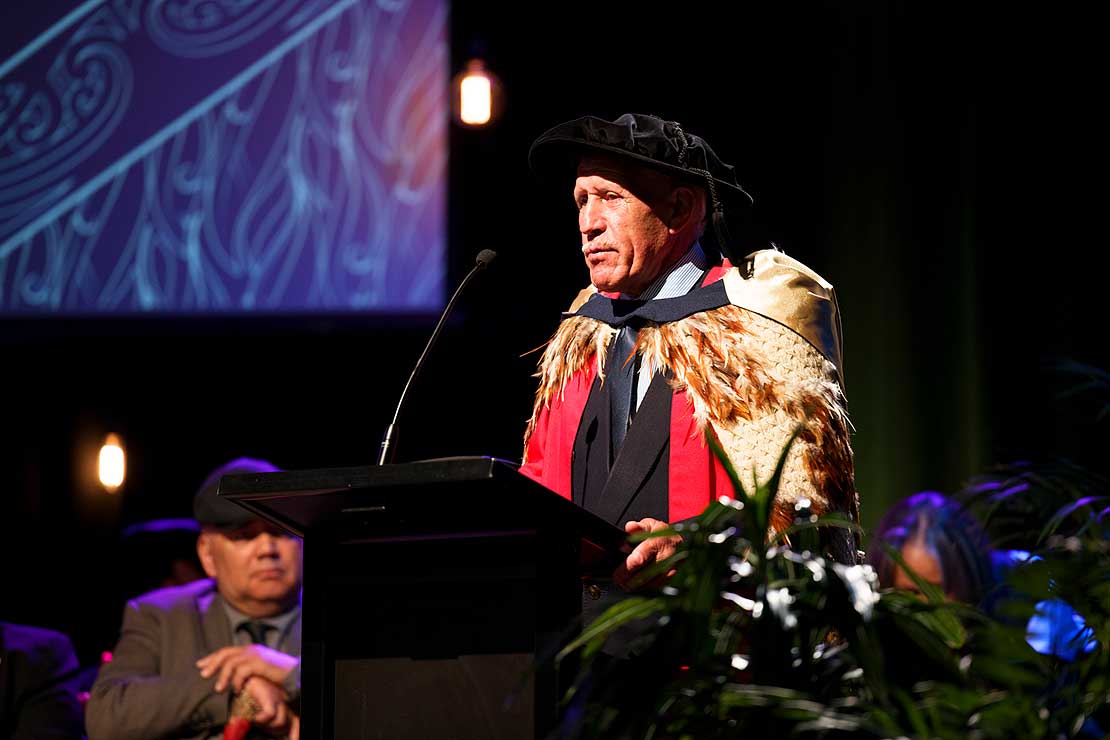 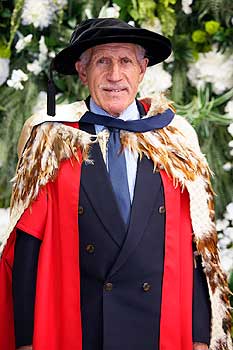 The highest academic accolade, an honorary doctorate (Doctor of Education, Honoris Causa) has been bestowed by Massey University on Rangitāne leader and kaumatua, Manahi Paewai in recognition of his dedication and contribution to Māori education.

Dr Paewai was honoured at a special ceremony to honour Massey University Māori graduates today in Palmerston North. Deputy Vice-Chancellor Māori, Professor Meihana Durie says Dr Paewai was a very deserving recipient who has shown an unwavering commitment to education as a pathway for Māori futures, a commitment that has been especially evident in his leadership with Rangitāne o Tāmaki nui a Rua, Te Kura Kaupapa Māori o Tāmaki Nui ā Rua but also in navigating outcomes across a number of critical issues at iwi, hapū and community levels.

Dr Paewai graduated from Massey in 2005 with a Graduate Diploma in Māori Development to build on his earlier teaching qualification and has made an immeasurable contribution to the university over many decades. From the earliest days of the Te Kupenga o Te Mātauranga Marae on the Hokowhitu Campus in the 1980’s to the opening and naming of Toi Te Ora, at Te Pūtahi-a-Toi in 2018, Dr Paewai has been a leading light and a strong supporter of Kaupapa Māori at Massey, helping Māori students, staff and whānau, hapū and iwi members to study at Massey University in programmes including Te Aho Tātairangi, Toioho ki Āpiti and Te Aho Paerewa.

Professor Durie says Dr Paewai’s commitment to Māori education has been demonstrated by his active participation and leadership in university events of significance, including the facilitation of wānanga to explore matters of scholarly importance to Māori, his cultural leadership and advice on matters relating to Māori education, Iwi engagement and Mātauranga ā Iwi. “His passion for Māori success, for Te Reo Māori and Mātauranga, has guided university leaders and also inspired new generations of Māori students, some of whom are here with us today. The totality of Dr Paewai’s impact, though difficult to measure, has undoubtedly been transformational.”

Dr Manahi Paewai says he was proud to have his whānau, kura kids and many people he knew from over the years, attend the ceremony where he received the honoray doctorate.

“It’s all a bit surreal really. I’ve been to many of these functions over the years and you sit in the audience and come to support somebody, usually the kids from our kura or family members. I’ve seen a lot of people receive PhDs and honorary doctorates and you enjoy that, never really thinking that one day it might be me.

“It was something I had not ever thought of, never in my wildest dreams.”

He enjoyed the moment and wanted to acknowledge his “olds” who he credits for helping him to do the work he has achieved.

“They allowed me to do the work that I did because they gave me the information. They’re the ones that should be wearing this, not me. I tried to express that to the graduands in my speech that they shouldn’t forget to acknowledge them [their elders] every day because that’s where all the knowledge comes from.”

Dr Paewai’s accolades include being made a member of the New Zealand Order of Merit for Services to Māori in the 2015 Queen's Birthday Honours and becoming a recipient of Creative New Zealand’s Ngā Tohu ā Tā Kingi Ihaka | Sir Kingi Ihaka Awards recognising a lifetime contribution to strengthening Māori art and culture in 2017.

Today was the first time conferment of the award of Doctor of Education (Honoris Causa) has been held at the Celebration to Honour Māori Graduates rather than the main Massey Graduation in recognition of the significance of this award to Māori.