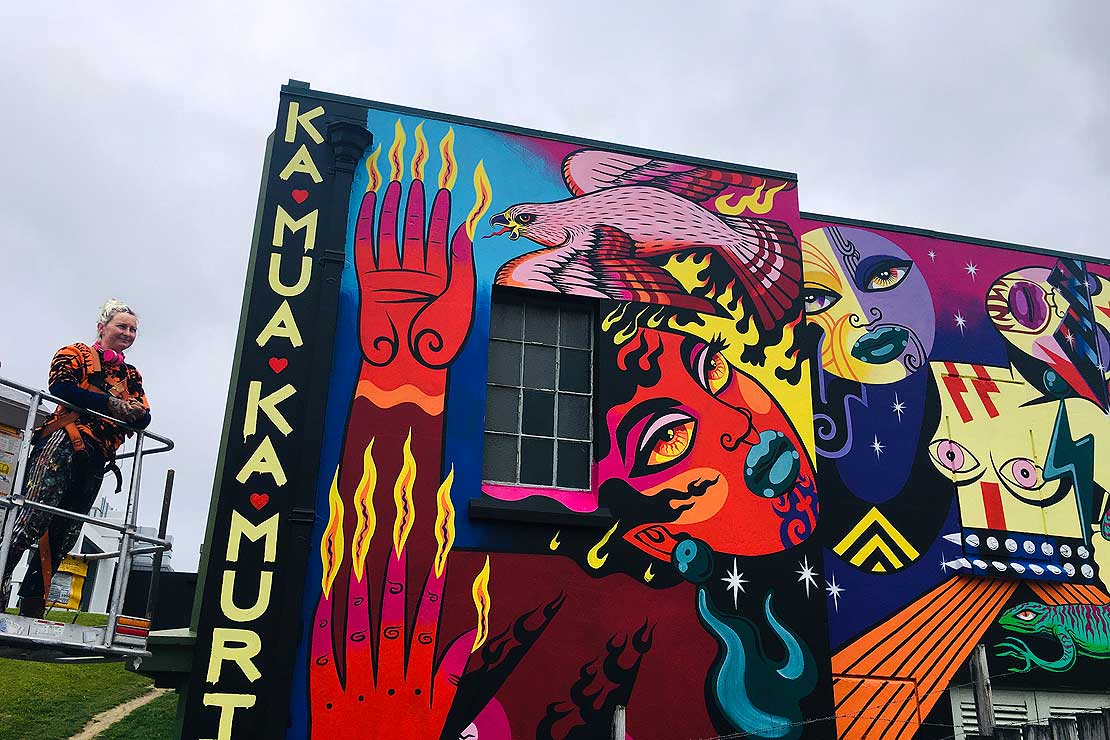 A new mural by artist Xoë Hall (Kāi Tahu) has been unveiled at Massey University’s College of Creative Arts showcasing the creative spirit on the Pukeahu Wellington campus.

Miss Hall says the inspiration for the project came as a result of the major changes in 2020. “The story of the mural was designed after the nationwide COVID-19 lockdown with dreams of a better and more sustainable future for our people and our land in mind. We look back on the lessons and stories of our tīpuna; the ancestors of this land, in order to create a future we would like to move towards.”

She says the mural is read from the right hand side (the past) and works backwards to the left (the future). At the beginning of creation, the sons of Ranginui and Papatūānuku (sky father and the earth mother) made the difficult decision to separate their parents forever to bring light to the world after being locked in the darkness of their embrace for a long time. The sun shows a bright future ahead.

“As our eyes move along the wall toward Massey University and Wellington High School, we meet Hiwa-i-te-rangi, the star of Matariki who we send our wishes and intentions to for the coming year. We make a wish for a better future for the planet, the whenua and the people. Well, 2020 has turned the world on its head so let's start again. I wish we all do a lot better for the planet and each other.” 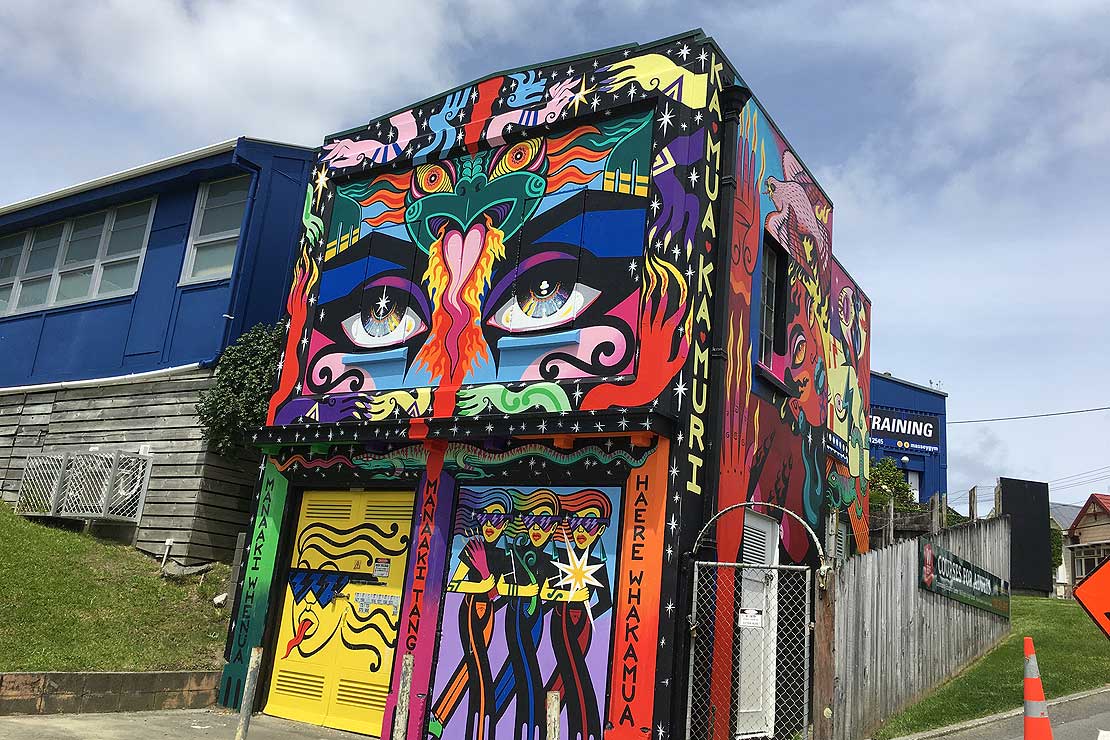 A section of the Ka Mua Ka Muri mural.

The next scene introduces Hinetītama (atua/goddess of the flashing dawn), who represents the dawn of a new world, and Māui crawling into the night of Hinenuitepō (atua/goddess of death and night) speaks to the death of an old era, which Miss Hall says represents death to broken systems, colonisation, racism, sexism, slavery, pollution and everything else that is hurting the planet and its people.

“Mahuika (fire deity) lights the way with her ancestral fire, Māui the trickster appears again, this time as the burnt-bellied hawk to remind us to be brave and take risks in order to carry the flame of our tīpuna (ancestors),” Miss Hall says.

The last section shows a personification of the future which Miss Hall calls “a hybrid made up of lessons from the past, the land, our tīpuna, mixed with a modern world, a student of the now”. The messages on the pillars, “Manaaki Whenua, Manaaki Tangata, Haere Whakamua” - “Look after the land, Look after the people, Go forward” presents a way for the future.

“We love the way that Xoë’s mural speaks to the creative spirit that has been integral to the Wellington School of Design since it was established in 1886. It acknowledges our past, while looking to the future – ka mua, ka muri – expressing hope, positivity and strength, and embodying our belief that the creative arts is the foundation of our cultural identity, emotional wellbeing and economic health.”

“The location of the mural foregrounds our uniquely shared history with Wellington High School, and we were delighted that one of their year 10 art classes was able to assist Xoë in the completion of the project. We are thrilled with the result - a vibrant and affirming inspiration for current students at Massey and Wellington High, and a signpost that creativity does indeed thrive here on the Massey campus," she says.

The mural wase officially launched last Friday with representatives from Wellington City Council, Wellington Electricity who both contributed to the project, alongside Wellington High School and Massey University.