A gifted korowai and family from Australia highlights for graduates 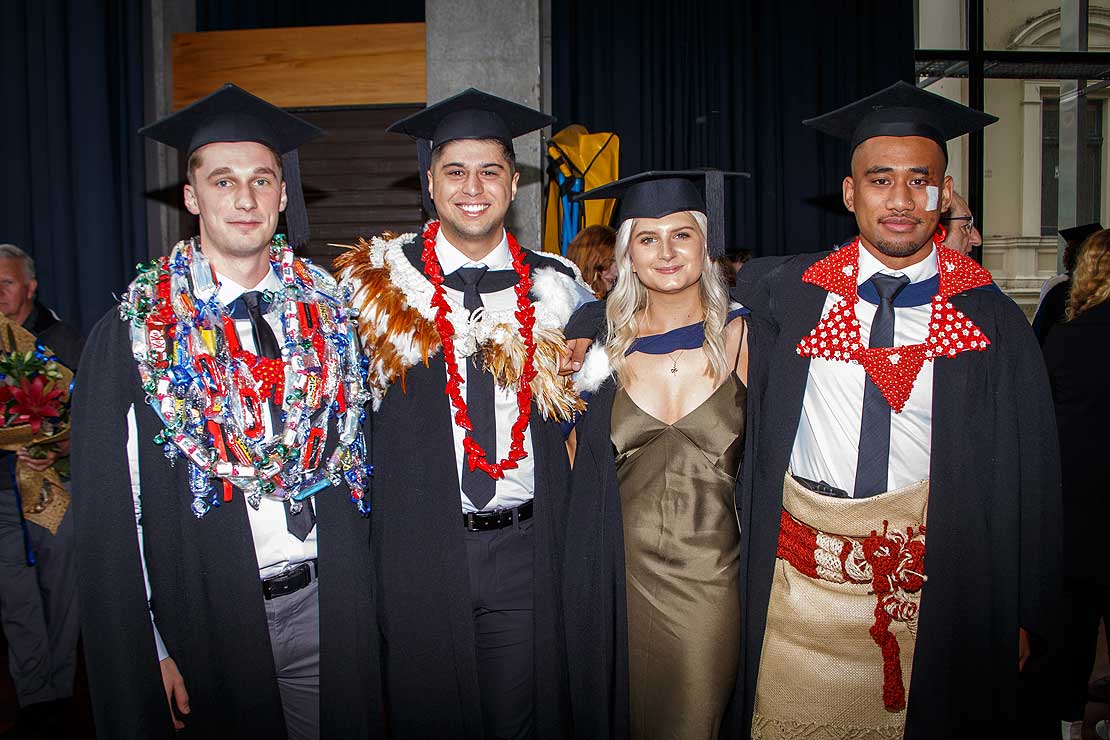 Beginning a whānau tradition with a korowai and having family arrive from Australia with the opening of the travel bubble the day before graduation, were just some of the extra special moments for the nearly 800 graduates who celebrated in Wellington on Tuesday.

For some, the wait for graduation had been extra-long after choosing to defer last year because of the first Covid-19 lockdown.

They said it was well worth the wait.

“After working so hard, we thought why not [defer]? It feels good,” says Olivia who is now working in the Upper Hutt City Council’s marketing team. She was joined at the ceremony with her mum Kim Mellor and grandmother Lou Mellor who are also Massey graduates.

“I’m glad I made it, but I’ve got some strong female role models to pave the way for me, support me and proofread my stuff for me,” she says.

Pita now works for the Ministry for Social Development in the service design team, redesigning services so they are “enjoyable and efficient” for both the ministry’s clients and the organisation.

“I was always keen for work in service design. As for working in Government, I think that was luck of the draw, just applying and working hard. I’m loving it.”

Surprise gift of a korowai Bachelor of Creative Media Production graduate Daesha O’Leary, Ngāti Whakaue Te Arawa, did not know her whānau were going to be there for her graduation. They travelled from Rotorua to surprise her and gift her a korowai they had made.

She says the day was overwhelming on many levels.

“This is a tradition we are just starting. I’m the first one to wear it in my family and hopefully it’ll get passed down for generations.

“Part of me didn’t feel capable of wearing it or bestowing this kind of taonga, but it goes to show, there’s no limit to who can wear these. I’ve been bestowed this from my family and it just means a lot.”

Family arrives from Australia just in time for graduation

With the opening of the trans-Tasman travel bubble on Monday, Lorna Halaleva's parents and aunty could travel from Melbourne, and arrived the night before graduation in Wellington to join her.

She graduated with a Bachelor of Health Science after initially studying nursing for two years before switching degrees. She’s now employed by Queenstown District Lakes Council where she is an environment health officer.

“I just loved health science a lot more and discovered it as an option through nursing. My role is based around anything that affects  public health like water, air, food and soil quality, and working with businesses like hairdressers and campsites.

“During Covid-19, we were some of the people who stood at the front line and made sure everyone who was coming through was safe to come in. It’s been a big year!” Graduate Lorna Halaleva whose family joined her from Australia.

PhD research gives back to health sector in Nepal

Doctoral graduate Sudesh Raj Sharma brought his family from Nepal to New Zealand five years ago to study a PhD in health sciences. His research focused on non-communicable diseases, which are not passed between people, such as cancer, heart attacks, strokes and diabetes, for example, and how they affect low-income countries like Nepal.

He discovered the country’s health problems are driven by socio-economic status, gender and health system factors, among others, and has identified leverages for health system-led action to address the problems.

“It’s been a wonderful journey. I had the most wonderful, understanding faculty members supporting me. I wanted to study an issue within the health system in Nepal and Massey offered scholarships on top of the PhD degree offer, which is when my journey began.”

With a background in public health already, he is now engaged in further research in New Zealand and around the world, and plans to apply his research findings to helping developing countries like Nepal with their health systems. Doctoral graduate Sudesh Sharma with his family after the graduation ceremony.